The fact that risk and danger have their own beauty,  and every security has a price,
was something hardly anyone wanted to hear in the modern period. 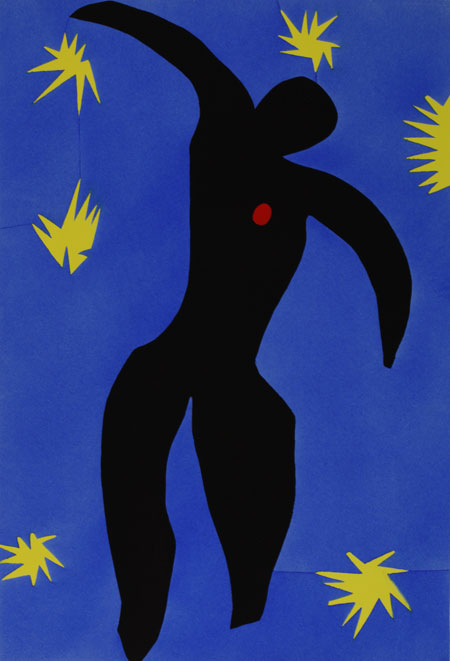 Icarus in midst the stars,
not the sun

Icarus by Henri Matisse, according to general opinion, depicts the ruinous fall of this arrogant character: He desperately swings his arms and his gaze appears to be full of fear and directed downwards. And yet, the drama of the event is restrained in favour of the poetry of the moment: Icarus is immersed in the endless blue of the upper celestial sphere, the twinkling stars are not above him but rather surrounding him, as if he were their playmate. The exuberance of the unexpectedly high flight has turned his heart into a brightly glowing red fleck. It should not be difficult to introduce this fantasy into this core medi-tation: an elevated experience of the transience of life.

Core Meditation 2:  A good start is half the work.

Albert Einstein stated that his mother often said to him: "You should be happy". When he stated in one of the first essays he wrote as a schoolboy, that this was "the most important thing in life", the teacher said Albert had not understood the question. "Then Sir, you have not understood either life or happiness!"

Education, career, a secure life, leisure time and above all health - and perhaps, as a result of these, arrogance, bought happiness and second hand living. The fact that risk and danger have their own beauty, and every security has a price, was something hardly anyone wanted to hear in the modern period. Even Icarus is doomed in this depiction of death; his heart will soon cease to beat. But before this, it glowed in the rapture of an unprecedented act. This is more than the vast majority of us can say about ourselves. To have touched the stars - and then burn up in the rays of the sun.

I am thinking of parents - they wear themselves out for home and family, and yet their hearts glow and their wrinkled eyes are still radiant. Or an athlete - his hobby allows him to reach for the sky and his eyes sparkle like the rays of the sun all of his life. My sky blue, my star, my sun - my heart glows in meditation!

Matisse - Icarus (variant of the artist) 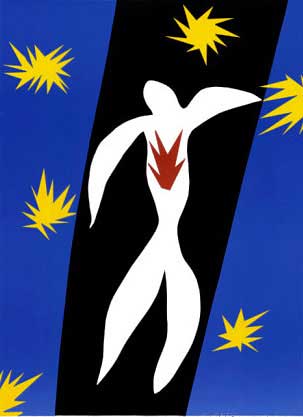 For me, there was a very different, very personal core meditation. I know a man who is still quite young and has to live with a physical disability of the legs. If you see him on the street, he is usually looking attentively at the ground and slowly takes one sliding step after another. In the greatest moment of force, he painstakingly lifts his shoulders and pushes outward and forward a little with his hands. Seeing him was something truly special: he stopped and straightened up and, with a little difficulty but with radiant eyes, he looked at me - an encounter with a heart glowing red with love.

This encounter, this one brief movement, is as clearly impressed upon my senses as the boundary lines around the Icarus figure cut from black paper. And this conquest transferred itself to me - one more step, ah - and another step, ah... And like a child, I take another step for Mama, Auntie, Helmuth, Benedict.... Healing and soothing, restoring courage and strength. - One further comment on this: every meditation in which something new opening up can be a gift from the stillness. Do not reject this as false humility or as "irreverent" but rather accept it with thanks and joy! 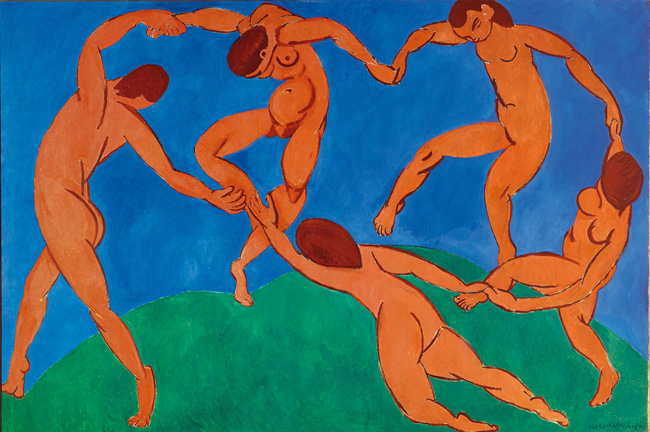 Description of the Painting

A painting without a frame, massive in size (260 x 391 cm) and yet almost too small to hold the wild dancers together. But they remain in the picture, nothing is cut, it is the dance that determines everything. No details, no shadows - independent of location, history and time. The clear, flourishing lines create energy and bring naked life into force. The nakedness of the dancers in free space emphasizes the freedom and elemental forces of the cosmic dance.

The blue background, the green grassy hill, the ochre red dancers - symbolic colours. The sky is deep blue, the earth is green and the dancers are flesh-coloured. Quiet blue in the background, a restless grass line (giving way under the stamping foot), aggressive red in front of the dance circle.

Five naked women, but they lack any individuality. Each one is dancing for herself and is at the same time supported and driven by the constraint of the round dance. The dancers have a striking, symbolic, ornamental effect in their fertility dance, an archaic incantation rite. The image represents the eternal circle of life.

"Painting does not mean coloring shapes, but forming colors."
"Whoever wants to paint a rose must first
forget all the roses that have ever been painted."

Quotations from Henri Matisse
"Painting does not mean coloring shapes, but forming colors." "Whoever wants to paint a rose must first forget all the roses that have ever been painted."

Compared to a first sketch with six dancers, one is missing from our painting. A small drama is unfolding in her empty space. Between the two dancers in the front to the left, the handhold is broken, the right falls forward and the left forcefully breaks through the general rhythm toward the back - whether these two can still grasp each other is left up to the viewer's judgment. These are drawn into the middle of the painting and into the dance by this device employed by the painter.

The dancers form an oval ring, almost a (broken) heart. On the one hand the ring is turning, on the other the figures to the rear are stamping forcibly on the spot, they lift their dancing leg with a jerk and then pound it on the ground. The elemental force of nature, nothing conventionally learned. There is no eye contact, it is not a social dance. The community is only created by the force of movement and by the power of the elemental cosmic forces rising from the subconscious.

Despite the chaotic and almost exuberant dance, instinct and awareness create an even balance within the painting. The forces outward and those at the centre are in balance. The painting is expressive and yet under control. Somehow, the painting is reminiscent of a lively dream, mainly because of the spectral female figures. In any case, it is probably the most famous painting by Matisse, and for him it certainly was a redemption when he had completed and averted the compulsive events before him in colour and form. For the public it was a challenge, but the storm of outrage was later followed by high recognition. 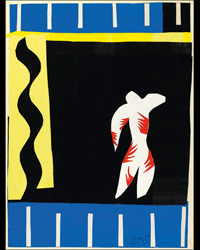 In the variants, the way in which Icarus is highlighted with black stripes and the emphasis on his glowing heart are impressive.

He has followed his star, the heaven, but has fallen to earth because of cruel fate - we could try to interpret it in this way.

But the most important thing is that his heart is alive, that his young life was fulfilled because his dreams came true!

Henry Matisse, one of the greatest artists of classical modernism: