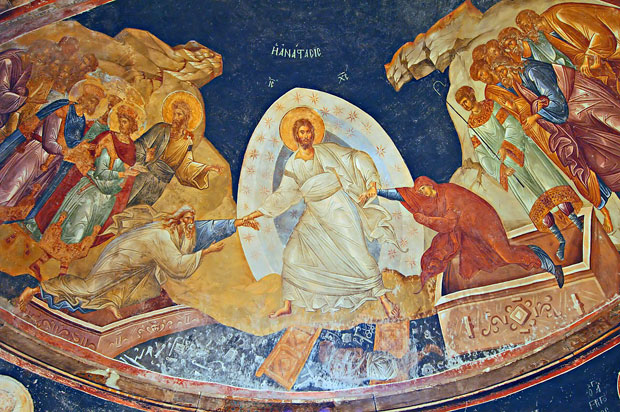 Chora church in Istanbul (fresco painted about 1315, restored in 1948)

A breath-taking painting! It is still the Easter image of the Eastern Church to this day: Christ rises from death in the underworld (Hell) and frees the dead.

This Christ appears powerful in an aura of light and stars. The folds of the robe show the internal excitement, especially the hem at the feet as well as the fluttering robe. Only the Angel of Annunciation Gabriel bears this detail!

Of course Christ gets involved and tears Adam and Eve (under the covering!) from the tombs - such excitement in the robes! The Lord has shattered the gates of the underworld; bars, hinges and key fly through the air en masse! The prince of the underworld is defeated and in shackles.

On the left we see John the Baptist and Kings David and Solomon, on the right we surprisingly see Abel (Cain) in a bright green robe with a curved stick and behind him the apostles and the people.

The mountains lean toward the viewer, a "reverse" perspective, so that the vanishing point is in the eye of the viewer. This impression is further reinforced by the image being curved.

The Easter Vigil in the Eastern Church is not to be compared with our Easter Vigil celebrations. It truly is the centre of ecclesiastical life. The faithful observe a strict fast, they attend a liturgy lasting about six hours (usually only in part!) and it is a festival for children and adults, a glory! The power for this flows out from our painting.

Christ is risen from the dead,
trampling down death by death,
and upon those in the tombs bestowing life. 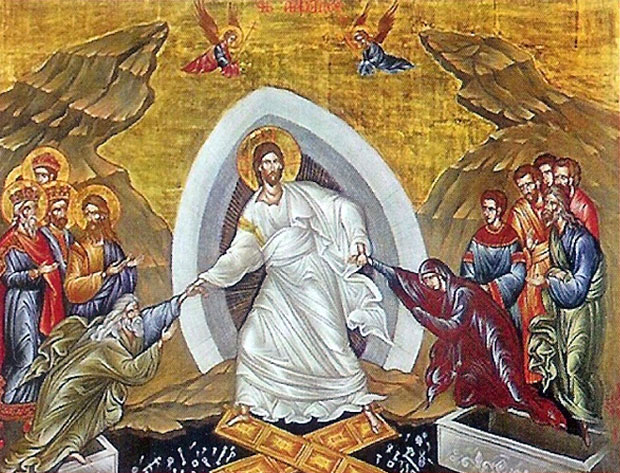 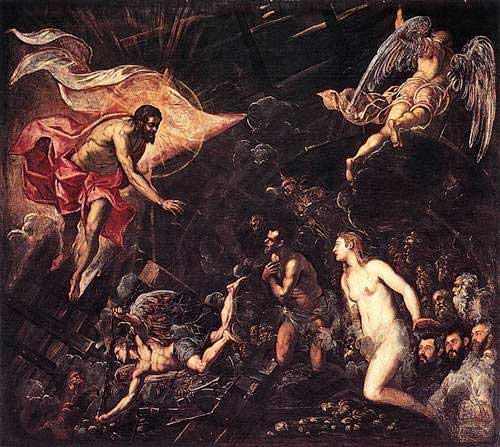 The Italian painter copies the orthodox image - but what comes out, besides?
Subjective game, no rack of religious depth.
One looks only the angels - or Adam and Eva!
And one had to cover the nice naked woman at that time with bright little clouds! 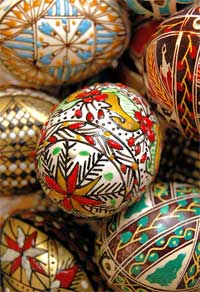 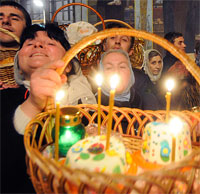 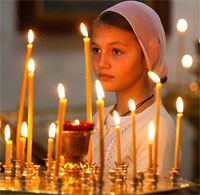 Some Orthodox Christians discourage the use of the word Easter, believing that the term has roots in pagan rites of the spring equinox and overtones of fertility. Most English speakers are unaware of the etymological origins of Easter, however, and use it without any sense of pagan connotations, and so Easter is also used by many Orthodox English speakers.

The origin of the term Easter comes from the Germanic name for the month in which the Christian feast usually fell, and so, just as the American civic holiday of the Fourth of July has nothing to do with Julius Caesar for whom July was named, neither does Easter have anything to do with the pagan goddess Eostre, the namesake of the month in which Pascha fell. This potential difficulty only exists for speakers of Germanic languages, however. Most languages in the world use a cognate form of the Greek term Pascha and so are free of any pagan connotations for the name of the feast.

having suffered on the wood of the Cross and died, descended into hell …. But He descended in soul, and He arose in the flesh, and He ascended equally in both, to come at the end of time ….

"O day of resurrection! Let us beam with God's own pride! Let everyone embrace in joy! Let us warmly greet those we meet and treat them all like brothers, even those who hate us! Let all the earth resound with this song: Christ is risen from the dead, conquering death by death, an on those in the grave bestowing life!"