Three times Eva in the nude 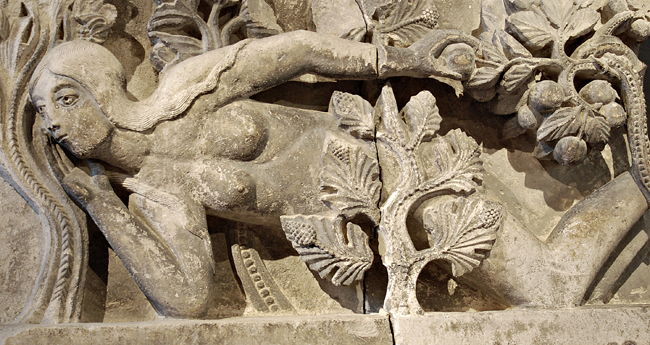 A naked woman meanders through lush vine and foliage forward, our eyes have to get used to it, especially in an insufficient figure. Knees and elbows wear the fleshy and yet weightless body, which is designed from the waist upward in the highest art and almost vibrant sensuality. From below a solid stone beam supports, from the back a smooth surface gives relief.

As in a honeycomb to life developed pure! The scene unfolds in three levels: In front the "Paradise tree in the middle" and on the right the tree of forbidden fruit (for the artist two deep meanings, including two trees), in the middle of it which forwards winding and forever female Eva, in background paradisiacal vegetation with tempting fruits.

Eva almost automatically engages the very long left arm back, she has the fruit already firmly in hand, she will do them picking an then  make her things. The rights scans on her face, touched and awakens it - what happens there? Two movements, two statements: guilt and sin, desire and punishment, awakening and anxiety. She wants it not really, "it draws them" - but it happens, and their innocence quakes and trembles, it is done! The woman is aroused and says "... I?" And since there are really life and death, love and hate, time and decay, caress and expulsion, Original sin and Redemption. And so it is still to this day, not only for Eva!

Fascinating is the expression of her face: absent because focused in the distance (she has a fear, the seductiveness would not come back?), dreaming and yet refined (best of all the seduction give way to get rid of!), or look for it simply Adam - "cherchez l'homme"?

An art-historical interpretation, however, assumes that it was originally in tympanum to Autun parallel bas-relief "Adam", but that the two figures from one large paradise tree in the middle in each case pushed to the left and on the right outside,  so alienation between man and woman through the sin! Not to be overlooked are the details: eyes open, affectionate flattering hair, a soft and almost breathing skin - Eva delightfully in nature!

And the snake? The tendril-like, almost iridescent little trunks point to it. Devil front of the head, devil who captures the feet or lifts, even a devil in the background from the bottom up across the heart. Point to the devil also the many serpentine movements of the composition – try once to slide your finger over the body of Eve, on hands and legs, on the tree trunks and the swaying, almost floating tendrils. 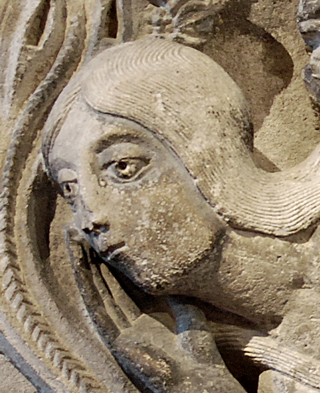 The naked Eva was like the other world famous reliefs of Lazarus Cathedral in Autun to the canons oft he 18th century no longer right.

They ordered to put everything in plaster or remove. This, however, remained the pieces of art from the barbarians of the French Revolution.

Our Eva was as a building material, recycling, again found in a house of Autun - she seeks till this day unsuccessfully after the lost Adam!

Eva is now the showpiece
of the Musée Rolin in Autun. 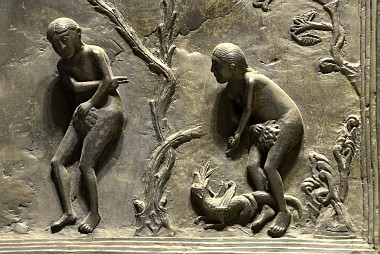 Cathedral doors in Hildesheim
Expulsion from the paradise(1015)

with the entire ensemble for World Cultural Heritage properly, with their almost two tons in weight and with an incredibly light, free, modern-looking artistic design almost unbelievable for the Middle Ages to 1050. Three-dimensional in relief, frugal drawn and certainly modeled, expressionistic in all internal drama - worth a visit!

Adam: "I am innocent, Eva gave it to me!“ But how naked he is, he pressed the fig leaf to his shame, but the stooped body and into the void depth look speak of guilt. With night and his right hand he is under the left to Eva: „It is her fault, leave me alone!“

Eva takes already the rights to cover herself. But even feet tremble - it should not sound obscene, but the tail of the serpent is still between her legs! Their eyes look for God the judge, along  Adam, her left says it all: "Nevertheless, the BEAST, understood it!“ And on his naked back, he must carry the curse oft his sin.

The snake, curled, sneering winner - but damned  it is. Also the tree with the forbidden fruit turns away, the Paradise tree in the center is destroyed, dried up. The sculptural scene in front of the bare and cold bronze background, essential and economy on a blank backdrop, as drawn in a nightmare, modeled, shown theatrically, really worth and worthy as a World Heritage Site!

And now? Eva shows the future their back, but Adam already suspects, where it will go. And yet - it is the longing for paradise! What comes next, has not caused God and nor wanted it, but man! Sin and guilt, suffering and strife, there will be, sweat and tears.

"The loss of paradise has consequences. Man's alienation from God, death, hardship earthly life and the tension between man and woman ... Man has a longing that it could be better as it is, it is the longing for paradise." (Inga Knapp)

next Rembrandt - The Prodigal Son >

Adam and Eve -
the fall of man

Biblia pauperum - the salvation history in pictures for those who had no books or could not read. But also for the clerics and monks there were images for meditation. As "biblia - book" these images were readable by all, and, nevertheless,  the artist had great freedom in the creation. In hundreds of churches to Santiago de Compostela might the scene "sin" not be absent, mostly as capital up at the end of the columns in the nave. 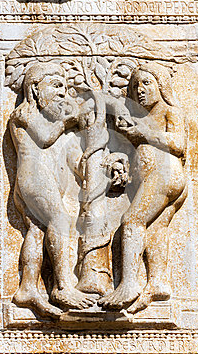 Besides, it was not about an apple tree or gluttony, but disobedience and sin against God. God has put the tree of knowledge of good and evil in the middle of paradise, he gives the norms and values ​​before. These correspond to his holiness and power, his divine nature. But the sinful man "eats from the tree, what fells him to". He places himself in the middle: "I let myself say nothing, I'll do as I want. I am enough for myself.“

The representation itself is often rather imaginative, but could always be easily "read" and understood. For the artist, it was certainly very welcome that he was allowed to represent the beautiful paradise-like bodies in the nude, this are the first nudes in Europe. How beautiful are Adam and Eve, who never even have just a glimmer of a salacious view. Naked, beautiful, fine, as befits a paradise before the fall.

The woman saw that the tree was good for food and pleasing to the eyes, and the tree was desirable for gaining wisdom.

So she took some of its fruit and ate it; and she also gave some to her husband, who was with her, and he ate it.

Then the eyes of both of them were opened, and they knew that they were naked; so they sewed fig leaves together and made loincloths for themselves.

When they heard the sound of the Lord God walking about in the garden at the breezy  e of the day, the man and his wife hid themselves from the Lord God among the trees of the garden.

The Lord God then called to the man and asked him: Where are you? He answered, “I heard you in the garden; but I was afraid, because I was naked, so I hid.”
Then God asked: Who told you that you were naked? Have you eaten from the tree of which I had forbidden you to eat?
The man replied, “The woman whom you put here with me - she gave me fruit from the tree, so I ate it.” The Lord God then asked the woman: "What is this you have done?" The woman answered, “The snake tricked me, so I ate it.” ...