The King of Dance  -  Shiva Nataraja 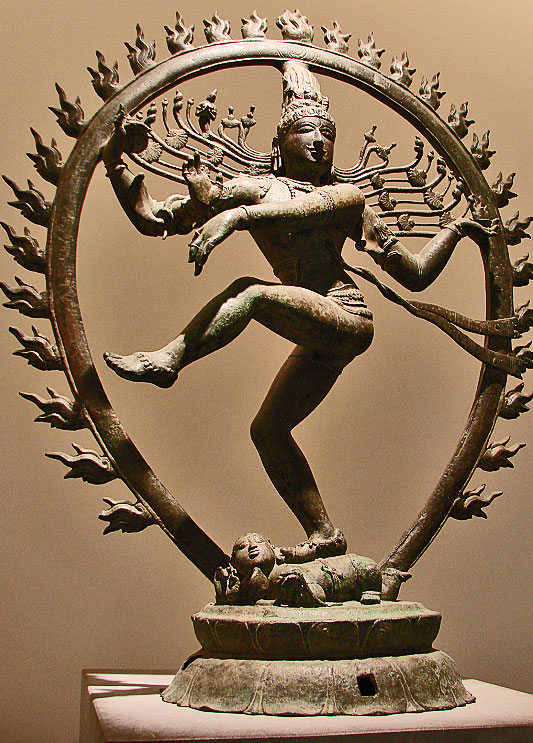 Shiva Nataraja - The king of dance

Hinduism is characterized by sensory joy gods. Probably the best known one of the Gods in Hinduism's is Shiva. And Shiva is a master of the dance!

Again and again Shiva is shown with four hands and two legs - laughing and dancing on the back of the demon of ignorance, Apasmâra. By ignorance the person loses  balance and consciousness; Shiva defeats with his dance the demon of illusion, of unrest, and thus the cause of suffering.

To us Christians strikes that ethical, moral and also dogmatic concepts like crime and punishment, good and evil, grace and salvation those are alien to Hinduism. 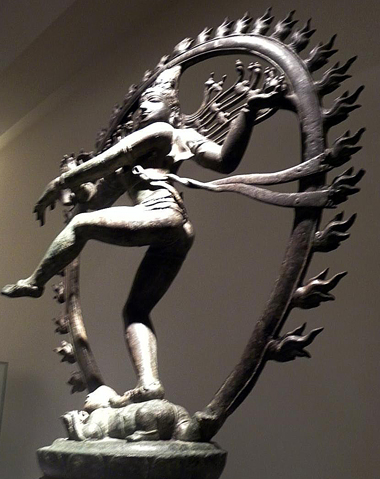 Elegance from another perspective

Shiva destroys in his dance the ignorance and relieves the suffering. At the same time he generates and creates life. With his dance he holds the world wheel and life wheel in swing and and keeps people’s hearts warm thanks to his fire.

Like in other myths the God of the life is also the God oft the death, the new creation through the destruction of the ancients.

Shiva dances in every human heart, in the centre of the universe - that is the sacred space of the heart. His dance literally means "heartbeat": it is the rhythmic envelope, each new shock, which replaces the old.
Birth and life thus from the destruction, the secret of life. 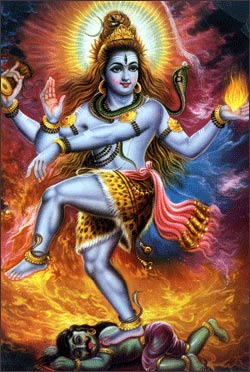 it is the the mostly widespread mission movement in Europe above all for youngsters and graduates.

The additions to the image of the dancing Shiva Nataraja are always the same, as in an icon. His head is adorned with symbolic adjuncts from which stands out a crescent moon.

His hair and body are decorated with queues and animal skins from animals he has beaten. Hands and feet are decorated with tinkling bells, so it appears as a dance for eyes and ears. In the upper right hand he holds and hits a hand drum in the shape of an hourglass which sets the tone and the rhythm of the universe and the time (creation in the rhytm of the heartbeat - the aim of meditation). In his left hand, however, he is holding a freshly cut from the stone fire which translates to a whole wheel of fire, a reference to the destruction and world fire.

What remains to be said is that everybody is free in Hinduism, as he interprets divine representations or forms himself further. This results in an incredible but also incalculable wealth of shapes and colors, in music and movement.

My advice: Read again the description of this picture work - and leave then yourself meditative to he dance, to the rhythm of God in your breathing and pulse rate, in day and night, year after year - the dance is one and the same for the whole world at all times!

Shiva is also a big dancer. He is called King of the Dance (Nataraja), but his dance is not dalliance, but an act of creation - he creates and destroys the world at the same time in this cosmic dance.

The Nataraja's portrait shows Shiva with four hands and two legs in a standing dance position.

He holds a drum in the upper right hand and fire in his left. The lower right hand is in the position of protection (also fearlessness). The left hand points to the upraised left foot. His left foot stands on the demon "illusion".

Usually this presentation is surrounded by a circle of fire. Shiva dances every evening to relieve the suffering of people and animals. Shiva dances in every human heart!

The drum represents the creation tone  (rhythm) and the fire symbolizes the flames destroying the world at the end of time. His other two hands, grant the blessing, reliefs and protection, contact the followers and encourage them to seek shelter at the feet of Shiva.

The demon, on who Shiva stands, symbolises  the ignorance that causes the loss of our balance and our consciousness. Shiva's dance leads to a heaven of bliss in which dissolves the ego. In his ,,Tandava„ dance, Shiva destroys the demon of the ignorance and cheers to the followers who dedicate themselves to him completely.

next  By the church year > 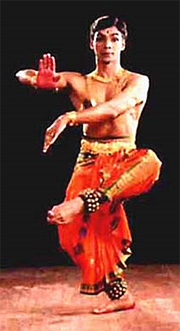 He not only received a 7-year dance training in various Indian classical dance forms, but also a training in singing and in the game of Mridangam (South Indian drum) and in martial arts and yoga.

In addition, he composes and writes choreographies for new dances and dance dramas, e.g., about Francis Xavier and Ignatius Loyola.

Of himself he says: "God called me to the priesthood, and gave me the same time the gift to dance to convey His word through this form."

Ganesha -
the Son of Shiva

Kitschy and ridicule are often referred in the West such representations of Hindu folk religion. Conversely, our Christian concepts of a Trinitarian God, of the Incarnation and sacraments for Far Eastern people are incomprehensible. In the West, history and philosophy are cited as "explanation", in the Far East images and myths. Whoever believes in God and trusted in him, can help itself with concepts or images. Terms seem clear and obvious, images take the heart and give worship and confidence. So the world's great religions each in their own way continue to us a little further, when the life loses his ostensible self-evident fact. The God to whom the people pray is the one and same God. 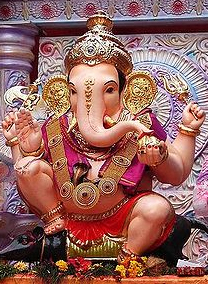 Ganesha is popularly held to be the son of Shiva and Parvati. Although he is known by many attributes, and Ganesha's elephant head makes him easy to identify. Ganesha is widely revered as the remover of obstacles, the patron of arts and sciences and the deva of intellect and wisdom. As the god of beginnings, he is honoured at the start of rituals and ceremonies. Ganesha is also invoked as patron of letters and learning during writing sessions. Several texts relate mythological anecdotes associated with his birth and exploits and explain his distinct iconography.

There can hardly be a home in India which does not house an idol of Ganesha. He is worshipped by almost all castes and in all parts of the country. Devotees believe that if Ganesha is propitiated, he grants success, prosperity and protection against adversity.

The parable of the "blind men and an elephant" - in this story, each blind man felt a different part of an elephant (trunk, leg, ear, etc.). All the men claimed to understand and explain the true appearance of the elephant, but could only partly succeed, due to their limited perspectives by finite human perception. There also Mahatma Gandhi was influenced to adopt principles of religious tolerance.

And Jesus Christ for the Christians?
He is a noble rose, unique and astoundingly, grafted on the strong root of the Judaism. However, in the garden where this rose prospers, there stand other miraculous flowers, by God's will also ...