Apa Mena has a Powerful Friend 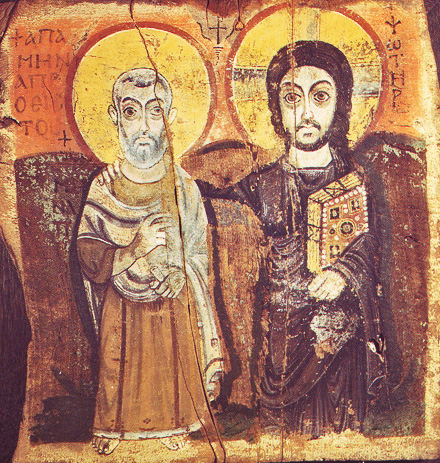 The Arabs turned the word 'Egyptians' into 'Copts' just as Constantinople later became Istanbul. Two important centres of early Christian culture are thusly named, where today the Christian minorities are involved in a life-threatening struggle against Islam. In particular, Alexandria in the Nile Delta was, together with Rome and Athens, a centre of Hellenistic, early Christian and later Muslim culture. The spirit of Alexandria wafted out into the world like the Apostle Paul or St Mark the Evangelist, who had brought Christianity to Egypt. Attempts were always being made to build bridges between Christianity and Classical Greek philosophy. The eight to ten million Copts on the Nile (just under 90 million Egyptians) have been defined by over 1,400 years of interaction and engagement with Islam, which has become very painful in recent times.

"Christ Protects Apa Mena" is a small icon which today is often used as travel or blessing icon. It is known among young people in particular from the Evangelical monastery centre of Taizé as a friendship icon - a good example of a new and beautiful engagement with icons, without diminishing the old, deep meaning. Apa Mena has a powerful friend, because Jesus himself protects him. Mena was an Egyptian soldier who lived as a hermit in the desert after his conversion to the Christian faith. Emperor Diocletian had him tracked down and executed after being tortured in the year 298.

The Egyptian god of death laid his right hand on the shoulder of the deceased to accompany him into the hereafter – this probably influenced the drawing of this icon, as everyone could read and understand this at that time. Jesus carries a book in his hand, the written and spoken word of the Eternal Word made flesh. Father Mena bears the scroll of his order, the word Apa (Abbas, Father, which later became Pabest or Abt in the West) identifying him as the leader of a family of monks. He is twice referred to in writing as "Apa Mena Guardian", once at the top in the salmon-coloured sky and for the second time at the bottom in the greenish brown earth. This probably means that he lives both in heaven and on earth. The word Saviour (Soter) is written near Jesus. And in the middle, the symbol of Christ, XP - Greek Ch and R for CHRistós.

But what is most striking about this icon is the solemn tranquillity, the security and fraternal connection between Jesus and his friend. And this also applies to us all. We have a strong and loving big brother by our side. There is a cross in his golden halo, which is missing from the image of the Mena and from ours, as the Lord carries it with us and for us. Truly a picture of friendship and blessings!

Apa Mena protected by Jesus Crist, angels look at you,
the holy George, the Queen of Sheba,
the escape to Egypt, Christ protect Apa Mena

Churches in Ethiopia: a thousand angels look at you
with big, questioning, knowing eyes

Three times „Ethiopia“ in the Bible

After the Flood, the progenitor Noah had three sons:  Sem, Cham and Japhet correspond to the peoples of Asia, Africa and Eurasia. Sem was the progenitor of the Jewish and Arab peoples; Japhet was the forefather of today's Greek and Turkish peoples and Cham of the peoples of the Nile up to Ethiopia. Thus, the Ethiopians were part of the story of salvation in the Bible from the very beginning.

King Solomon was rich and wise, his fame reaching the Queen of Sheba. In the oldest traditions, she came from Aksum in North Ethiopia. In 950 BC she visited King Solomon; she brought him rich gifts and was amazed by his wisdom. From her brief relationship with Salomon, she became pregnant and gave birth to a son she named Menelik. He in turn visited Salomon, and received the rich gift of the Ark of the Covenant and the two stone tablets of Moses, which have been venerated in Aksum ever since.

On the way from Jerusalem to the South, the Apostle Philip met the Treasurer to Queen Candace of Ethiopia. Philip climbed onto the inquisitive treasurer's chariot and spoke to him about the Book of Isaiah: "Like a sheep, he was led to the slaughter." The high-level official was baptised on the spot - and thus brought the Christian faith to Ethiopia.

Storm on the lake  -  Jesus sleeps in the boat (contemporary icon)

In Ethiopia, Orthodox Christianity flourished, especially in the North. The inhabited land is about 3000 m above sea level and mountainous, which is why it was able to hold its ground against the surrounding Islamic riparian states and Arabia. Today the country has about 100 million inhabitants, of which approximately 55% are Christian (including 40% Ethiopian Orthodox) and 40% are Sunni Muslims. As a few hundred of the first followers of Mohammed found refuge in Ethiopia from persecution in Mecca, they were excluded from the jihad in the Koran - this still ensures lasting religious peace in the country today. The main Amharic language is a Semitic language and thus a close relative to biblical Hebrew. The self-confident people of Ethiopia with over 80 tribes and languages are very different from the African peoples and were never completely under foreign influence or under European colonial rule (with the exception of a 5-year uncontested Italian fascist adventure 80 years ago).

Around the legendary city of Gondar in the North as well as on and at the huge Lake Tana, icon art has been flourishing again in recent decades. Ecclesial life was also hampered for centuries by political and social turmoil and the fight for survival against the forces of nature and Islam. The Ethiopian icons appear childlike and naïve to us. This is because of their large eyes; the heads are usually over-sized too, thus becoming the most important figures through status perspective.

In our image Peter: "Jesus, awake, help!" Jesus: "Oh ye of little faith." The fear of the two disciples on the left, huddled together and yet fully trusting all others. An image of the Church today: Storms such as they has back then - is the Lord asleep today as well, is this not a problem for him?  Are we still afraid even though we could swim like the fishermen of that time - or is that no longer enough in modern times? In spite of everything, do we still have the trust of the apostles in our Lord and supreme helmsman?

Triptych with life of Jesus in the middle section

Diptychon
as a travel icon

Birth of Jesus
with Joseph
and young shepherd
(on behalf for myself
as the viewer!)

If the thirsty bird may drink from your eye

Saint Francis and the wolf of Gubbio, the bunny on the island in Lake Trasimeno and the owl in the night forest of La Verna, the bird’s sermon: the animal friend of Assisi has got an animal-loving brother in Ethiopia, called the holy Gabre Manfras Kiddus, Abo shortly subscription.

The legend/story says, he had lived 365 years long, which he spent 100 years as a Evangelist in Egypt. Then he retired with 60 lions and 60 leopards again for 100 years deep in the back of the desert. He met there the animals with great affection and preached peace to them. When he found a thirsty bird, he let him drink water from his eye. His hair grew down to the toes and became as white as snow as the years passed.

He then visited the holy places in the country of Jesus, there he celebrated on the highest feast days reverently the Divine mysteries and received Holy Communion. He could speak Hebrew and got along with everyone in their languages, how it was possible before building the tower of Babel for everybody.

With 300 years he moved from Egypt up to Ethiopia to preach to the people there in the high mountains the faith and the love of Jesus. With God's help and miracles he resisted diverse and wild attacks of the devil.

When he died Got-devoted, he lay down in form of a cross on the bare earth. God called him to himself and assigned him a seat at his side to him. There he prays for humans and animals and helps them.

Holy George defeats the dragon and saves the king's daughter

Newer icon from a monastery in the Tana's lake 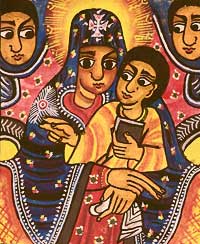