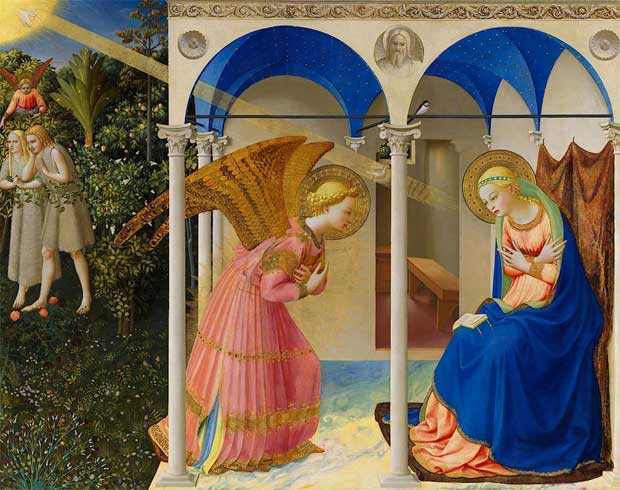 The colours in this painting, painted 600 years ago in tempera on wood, are marvellous and incredibly fresh. Still precious colours (lapis- lazuli and gold), the angel rather stormy, Mary bows to the word yes. The vanishing point again in the small window of the room, this time open with its simple decoration.

In 1611 the painting arrived in Spain, in 1861 it was 'rediscovered' in a women's convent in Madrid and arrived in the Prado. Restoration has restored it to its original splendour.

Significantly and wonderfully, the closed garden has been opened up - to the expulsion of men from paradise. The painting already breathes the spirit of the Renaissance in Italy, celebrated as the beginning of modernity. 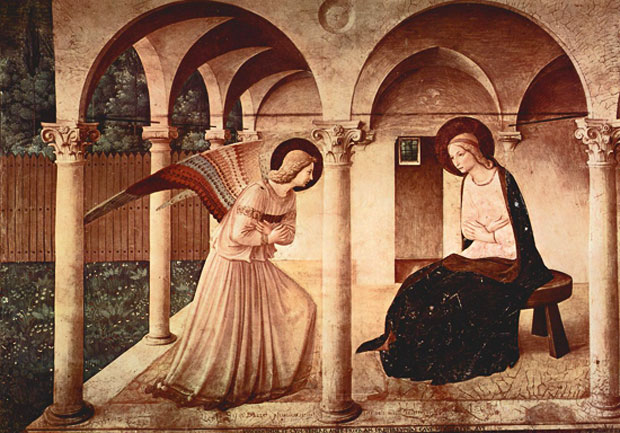 An intimate image from the life of the Virgin Mary, often paired with the image of the "Encounter with Elizabeth" (the children Jesus and John!) in the Middle Ages. Fra Angelico still paints in a conservative, Late Gothic style. Giotto di Bondone, who painted about a century earlier, comes to mind. However, he is also very open to the developments leading up to the Classical Renaissance; one must marvel at the loggia painted here!

The scene is presented on two sides of an open portico using the central perspective that was modern at that time (the vanishing point is the mouth of the angel). Mild light from where the angel appears illuminates the room. The Angel and Mary are no longer on one level but are positioned diagonally within the space. Ionic and Corinthian columns mark the important parts of the room, which are otherwise undecorated, with no dove or additions for the Angel or for Mary.

The holy Mary sits in a pose indicative of humility and devotion with her arms crossed on a sturdy wooden stool without any backrest. How impressive and inexpressibly beautiful the countenance of face, eyes and mouth, the crossed arms, the openness of Mary's body in the white dress under the dark coat. Awe, deep respect and humility characterise the atmosphere. The image lives from an appreciation of the Gothic period and is already quite Renaissance in its human openness. A door to contemplation and meditation.

There is a marked contrast between the loggia and the outside world , bright and dark, intimate and overgrown. A rich, dark green can be seen to the left and in the background. An imposing palace fence separates an enclosed, flower-filled garden from an unkempt wilderness. This fence is also found in many pictures by a modern painter, Marc Chagall, thus protecting his "Staedtel", courtyard and parlour. Fra Angelico was familiar with the medieval symbolism of Mary as an enclosed garden paradise, where lilies of purity and red roses of mercy bloomed: "A garden enclosed is my sister, my spouse; a spring shut up, a fountain sealed." (Song of Solomon 4:12).

The fresco bears the following inscription: "When you come before the image of the Ever Virgin, take care that you do not neglect to say an Ave." In prayer and especially in contemplation and meditation, the same thing happens as in the picture: God speaks to us and we respond: "Be it done unto me according to thy Word." Having faith, even beyond knowledge and understanding, to open oneself to life, let God in and make oneself available to him. Mary is to bear a child, and the power of the Most High shall overshadow her; The holy Child shall be called the Son of God (Lk 1:26-38).

If the annunciation is a silent, mysterious, internal process, Mary's hymn of praise to Elizabeth is mighty and powerful and even contains revolutionary ideas: Whosoever does great things and appears high shall be brought low, the hungry shall be fed and the rich shall go home empty-handed. Mary trusts in the Almighty God, that his kingdom shall come on earth and that his will shall be done.

Brilliant Oil Paints -
The Advance of the North 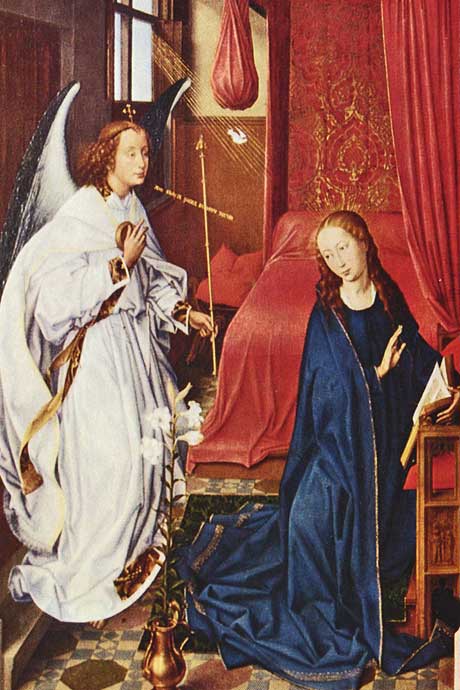 Approximately ten years after the sober and quite intimate painting by the Monk Fra Angelico, the Dutch painter Rogier van der Weyden also painted the "Annunciation". What a difference!

For his part, Fra Angelico himself was already free of medieval ideas. His Annunciation is an encounter between the objective messenger of God and a plain, simple, collected, contemporary young woman, whose virginity was still intact but who was open to what lay before her - this graphic, colourful depiction is unique in the history of art!

The image from the North is very different: "modern" at the time in terms of technique, composition and execution. Colourful oil painting - in Italy only since 1475, "stolen" from the Netherlands by Antonello da Messina! The mystery of the time was how the binder, namely oil, could be dried (highly toxic additions to the mixture!).

The vanishing point of what was then the recently discovered central perspective is a point above the monstrance-like drawing above Mary's bed, at the head! The naturalness of the folds of cloth, the hair, the bed of a Virgin, "not known to any man". The incredibly delicate entrance of the Holy Spirit through the open window by Mary's bed, and the words of the angel painted in gold (which form a cross with the messenger's staff - the painter was certainly aware of this).

More rooted in the old icon image: the flying angel without feet (in the icons he was given his own podium), Gabriel's staff and the messenger’s diadem in his hair, the fluttering movement of the angel's robe, the defensive and at the same time welcoming right hand of Mary, and the luxurious fabrics from the Netherlands of that period famous throughout Europe arranged in complex pleats, with Mary lying on a luxurious carpet on the tiled floor.

New symbols: The white lily (often used very meanignfully with a red rose!), the book representing the craving for books emerging at the time and the newly invented letterpress printing. Luxurious clothing, an open hairstyle, Dutch/Northern house decor, the bed found somewhere between eroticism and the TV couch. Just as vivid, above the bed, the cloth temporarily rolled into a ball - "as no man has known me" (the corresponding English-red cushion still lies unused beside her bed!).

I can only say one thing: Do not simply put these images aside after "understanding" but rather penetrate them through patient meditation and inner soul searching. And you will learn something new - from the image and a thousand times more for your life!

Announcement
of the Birth of Jesus

The angel Gabriel was sent from God to a town of Galilee called Nazareth, to a virgin betrothed to a man named Joseph, of the house of David, and the virgin’s name was Mary. And coming to her, he said, “Hail, favored one! The Lord is with you.”

But she was greatly troubled at what was said and pondered what sort of greeting this might be.

Then the angel said to her, “Do not be afraid, Mary, for you have found favor with God. Behold, you will conceive in your womb and bear a son, and you shall name him Jesus. He will be great and will be called Son of the Most High.

But Mary said to the angel, “How can this be, since I have no relations with a man?”

And the angel said to her in reply, “The holy Spirit will come upon you, and the power of the Most High will overshadow you. Therefore the child to be born will be called holy, the Son of God.

Then the angel departed from her.  (Luke 1) 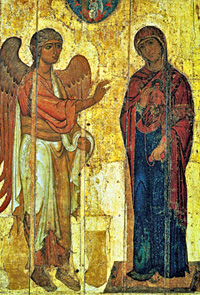 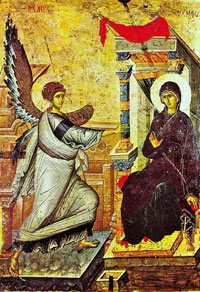 Michael weighs the souls
at the Last Judgement

Advantage of the colours in the north - oil painting was indigenous in the Netherlands much earlier than in Italy!

Annunciation in Prado Madrid, Fra Angelico San Marco, the Annunciation of Jesus to Mary, the Mother of God, Middle Ages and Renaissance