The icon is a cult image of the Eastern Church. It is used in church, primarily during the divine service, decorates homes and is taken on trips. In the church, icons are arranged above each other on a wall in several rows, depicting Jesus and Mary, local saints and the mysteries of the liturgical year. In the homes of the faithful, icons are primarily found in the red corn to the southeast of the living room, the family shrine we might say, which is red, meaning beautifully decorated.

According to the Eastern Church, the Holy Saint himself is present in the image. Even a newspaper image of an icon is revered, whereby the faithful consider such icons to be "in exile". This also applies for museums, not to mention the homes of non-believing collectors - intercessory prayers are offered for such icons. For a wedding couple, for example, the bride's father provides the wood and gold. The new family icon is then painted and consecrated at a monastery and hung in the red corner. The wedding icon always depicts Jesus and/or Mary with the family saints around the edge. A beautiful baldachin is often drawn before the icon; and if bad tempers prevail within the family the curtain is closed, as one cannot fight in front of an icon!

Icons of Jesus and his Holy Mother Mary are the most common. Followed by all the Saints of the Kingdom of Heaven, icons of the mystery of salvation and of the twelve major festivals in the liturgical year in particular. Because the icons are used for worship and prayer, they are usually painted in small sizes ideal for use at eye level. Larger images are also found in churches.

Icons are almost always painted on old and thick wooden planks that have been carefully prepared beforehand. The wood is deeply scored and coated with rabbit skin glue or fish glue, glued with a linen cloth and then coated about eight times with glue/chalk, depending on the locality. The surface is carefully polished and then painted by hand in order to achieve a close bond with the panel. Unfortunately, such preparations are often chemically simplified today and not conceivable for real icons. Nowadays, the drawing is transferred or copied from an existing template. This template is scored, so that the "Rhiza" show the exact lines of the image through the colours. Now the actual painting begins. 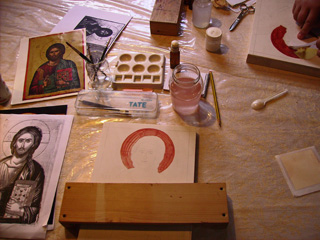 One usually begins with the gold gilding, depending on whether oil or gloss gilding is used. The halos in particular must be absolutely flat. A sensitive undertaking, always carried out according to ancient recipes. The gold is prepared by a machine to a thickness of 1/400 mm, and then hammered by hand to a thickness of 1/1600 mm in a booklet (with hammers weighing up to 25 kg, covered with the gut
of a young ox).

One usually starts with the clothing and then with the Incarnate. But the mountains and houses also involve a lot of work! The colours are applied using a mixture of egg yolk and water (one to four, though possibly up to twenty). This is called egg tempera. The colours consist of various finely ground minerals and metals, a never-ending topic of discussion among icon painters. The Russian icons are usually painted wet, whereas the Greek icons use thicker paint and are painted on an easel. Real egg tempera does not become opaque after the first coat but must be applied around three times. It is only when the individual colours have been applied that the highlighting process can begin. Whereas Western painting usually adds shade, icon painting works from dark to light! The three, five or more layers of highlighting create the quality of an icon. 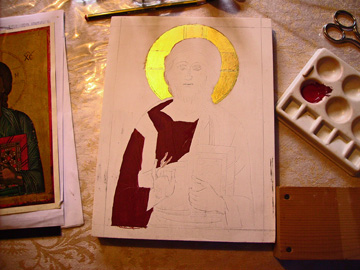 The Incarnate, i.e. the face, hands and feet, are then approached in the same way. The more clearly the icon progresses, the further away it moves from the original and allows for individual expression. How often does the icon painter ask his painting: "Now you are so beautiful - Can I make you even more beautiful?" The icon is only complete after the inscription, because God shows himself in Jesus through the word and image as a living sight. The application of varnish (e.g. shellac ...) is not actually necessary if the painting has been cleanly executed. After months of allowing the paint to dry, some icon painters dip their icons in boiled linseed oil and leave them submerged face-down in this overnight. Then they are carefully cleaned with drying paper (including newspaper) and sealed away for a month to protect them from dust. This hardens the surface to prevent any potential damage.

How this form of art came about still remains to be mentioned. The later Egyptian Pharaohs had an image of their facial features painted on their mummies in egg tempera, which depicted the dead with a high degree of realism. This tempera was mixed with hot wax colours, as were also used for icons up until the 6th century. They are still as fresh today as they were then! The Romans took on this realistic painting practice and the Greeks refined it. And so the first icons came about - unfortunately they have almost all been lost due to the iconoclastic controversy of the 8th century (image hostility of the Jews and of Islam played a major role in this). In the 8th century, egg tempera prevailed and has continued to do so up to the present day. The main period in which they were produced was the 14th/15th centuries, as well as various schools of icon painting after this, depending on the region.

The Greek Italian icons after 1453 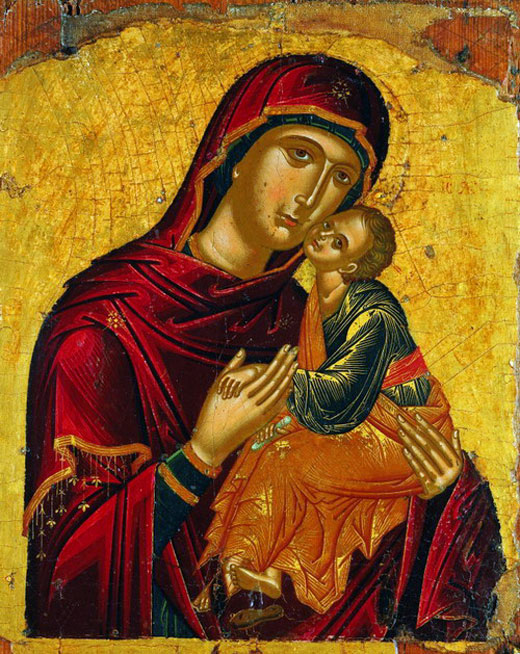 After the conquest of Byzantium by the Turks in 1453, many icon painters fled to the West. Icons continued to be painted there "in maniera greca" or "in maniera italiana", and are considered to be among the most beautiful by us today (see above). And so it is today too: after the Soviet persecution of Christians in Russia, there has been a resurgence of new and precious icons painted in the traditional style. 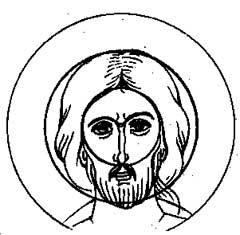 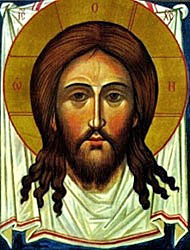 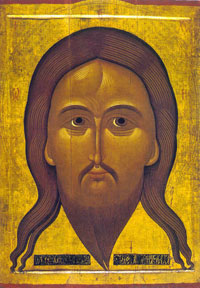 Above: Classical symmetry:
Vanishing point in the distance

Below: Icon - Symmetry:
Vanishing point in front,
in the eyes of the worshipper 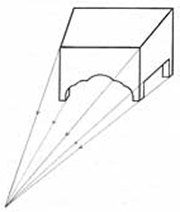 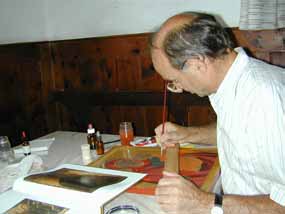 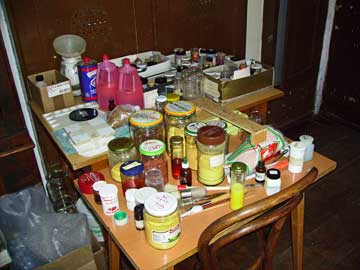 ourLord Jesus Christ,
true God,
you have left your faithful an image of your holy face, painted not by human hands but by the holy angels themselves, who sing praise and thanksgiving to you and to your divine Father and the Holy Spirit for ever.
Bless the holy images and those who painted them.
Bless the families and all the faithful who venerate the holy images. In them you yourself are present, as you once were here on earth for the eyes and ears of men to see and hear.
Hallelujah Glory to you Lord, glory to you.
Translated with www.DeepL.com/Translator (free version)

You have left your faithful an image of your holy face, painted not by human hands but by the holy angels themselves, who sing praise and thanksgiving to you and to your divine Father and the Holy Spirit for ever.

Bless the holy images and those who painted them.

Bless the families and all the faithful who venerate the holy images. In them you yourself are present, as you once were here on earth for the eyes and ears of men to see and hear. 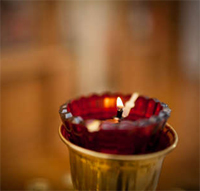