It is an image that the viewer can not immediately understand. The "up - down" orientation is already difficult and is only made a little easier by the large inscription bearing the name and title of the painting.

A wealth of shadowed, sharply-edged forms are set in sharp contrast to each other with dark contours. However, some of the lines are not square or split, but rather curved arcs. One's eye slowly gets to grips with the chaos and senses a certain spaciousness, whereby figure and background penetrate each other. This is also due to the monochrome colours of the painting; the warm colours move between dark brown and light beige and neutralise some of the sharpness of the angular forms. Only the lower left and upper right corners are darker than the rest of the painting, making all other parts appear brighter, running from the top left to the bottom right 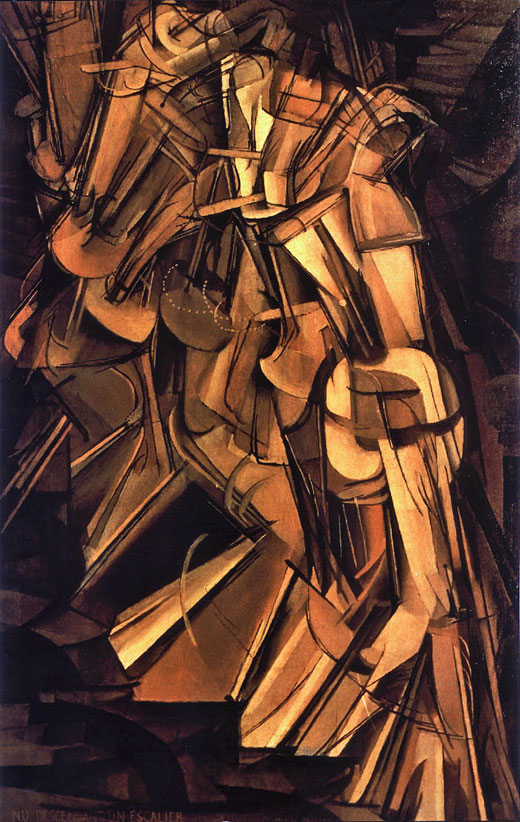 Without a title, one would be left helpless and alone before a painting that has rightly been categorised as "abstract". As laborious as a search picture, only parts of the image are apparent: the "staircase" in the bottom left; from the bottom to the top, the "legs" in the middle section cascading slightly toward the bottom right , bent at the knee; above this the "pelvis", torso, arm parts and barely identifiable "head". In the top right, one can perhaps make out the continuation of a "staircase". One can only sense the many robot-like individual elements moving downward in a specific rhythm - jerkily, as a staircase necessitates. Now the aforementioned arc-shaped swings become plausible too: they are supposed to "describe" a direction of movement.

The image is an attempt at depicting a movement through painterly means. Duchamp approaches the problem in a new way. He takes on board the innovative ideas of Cubism and Italian Futurism in particular. The Italian painters Carlo Carra, Umberto Boccioni, Luigi Russolo, Giacome Balla and Gino Severini developed their own dynamic concept from static Cubism.

the end of the conventional painting
Nude Ema by Richter,  Staircase down,

Duchamp works in accordance with the futuristic principle of "dynamism" and simultaneity: he does not fix a moving figure in the picture, but breaks it down into many different phases of motion, which he layers closely over and next to each other, so that the impression of a complex, consecutive movement is created. Above all, the inspiration for these efforts was - in addition to the general enthusiasm for technology and speed - a medium still in its infancy at the time, but which wanted to make motion sequences visible: the photograph and what developed from this "as the images learned to run", namely film.

"Is it a woman? It is a man? No. To tell you the truth, I have never thought about what it is. What should I think about that? My images are not objects, but rather abstractions. 'Nude Descending a Staircase' is an abstraction of the movement. Nobody had thought to introduce a movement, the actual movement, into a work of art. 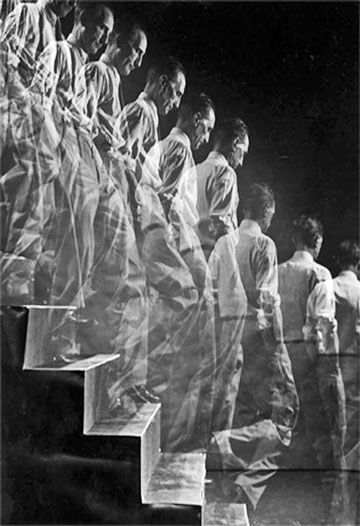 The futurists and I had planned it at the same time, it was already in the air somehow because of the invention of film and cinema. The fact that I had seen chronophotographs gave me the idea for the Nude.

The idea of describing the movement of a nude coming downstairs while still retaining static visual means to do this, particularly interested me. […] I have been told that this in no way reflects the idea of movement. In fact, it does not reflect it, but rather describes it.

And in the end, a painted picture is a diagram of an idea, and in this case this has never been done."
(Duchamp 1968)

Marcel Duchamp was born in Blainville, Rouen in 1878. In 1904 he came to Paris and was introduced to the art scene by his two older brothers. His early works reflect the art styles of the turn of the century and the early 20th century: Cezanne, Art Nouveau, Fauvism and Cubism. "I completed eight years of swimming exercises", said Duchamp himself regarding this period of time.

It was only from 1911 that the pictures bear his own stamp, followed by success in 1913: he exhibited four pictures at an exhibition in New York, where "Nude Descending a Staircase" was sold for what at that time was the very high price of $400.

The good response to his work in America prompted Duchamp to move to New York in 1915. There he met his friend Francis Picabia, together with whom he published a magazine that summarized and propagated what the art of the time was saying: a reversal of all previously defined standards of value, the anti-art movement called Dadaism.

In the years that followed, Duchamp attempted to break the habit of painting, to unlearn it, and in 1923 he final quit painting altogether. Between 1920 and 1926, he became increasingly involved in the production of objects and his famous "ready-mades", the first of which dates from as early as 1913: He mounted the front wheel and fork of a bicycle on a three-legged stool.

It is typical of Duchamp to have assessed his abstinence from painting in a very sober manner. He once said: "I consider painting to be a medium of expression among many others and not an end goal that must fill an entire lifetime". Duchamp represents a completely new type of artist that was unknown up until then. He is one of the new type of makers, his works are often the end products of a long process of thought, during which he was hardly productive at all. Thus, their real meaning is not easy to decipher

Marcel Duchamp had declared in 1912 after the unexpected success of his painting Nude Descending a Staircase: "This means the end of the conventional painting".

The probably most important German artist Gerhard Richter cited 1966 Duchamp with his famous picture "Ema", so to speak, to a new beginning truthful painting.

"The nude was a totally unpopular motive at that time. What was there to say, Marcel Duchamp had already said in 1912. Duchamp's famous Nude Descending a Staircase reminded not even to a person, but to a machine, whose movements were shown fanned out in several phases.

Nevertheless Gerhard Richter goes back to it. He takes the Polaroid photo of his wife Ema who goes down stark naked the stairs of the common home in Düsseldorf-Oberkassel, he hangs it beside his easel, paints it off and blurs it with a paintbrush. The unsharpness makes the subject anonymous. The private recording is destroyed." (Wikipedia)

If Duchamp had seen in humans only jerky movements, Gerhard Richter begins again with a truly feminine, timeless nice picture, a true renaissance and rebirth of the person in God's image. 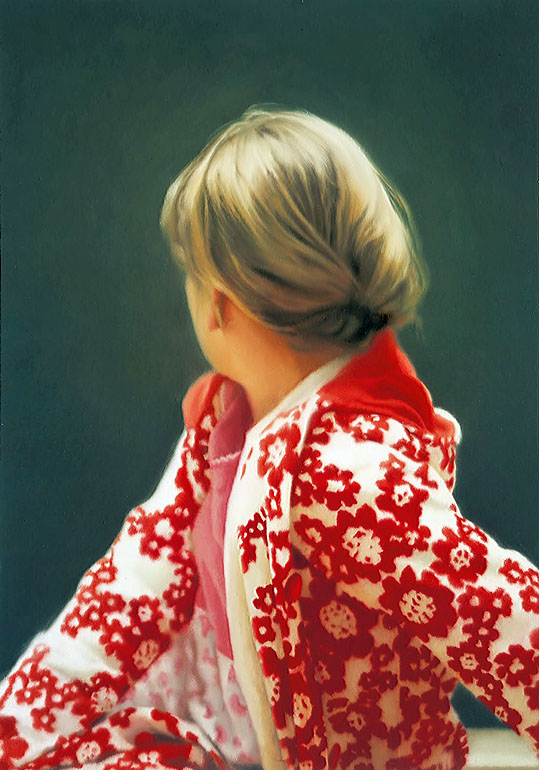 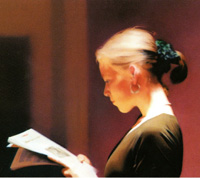