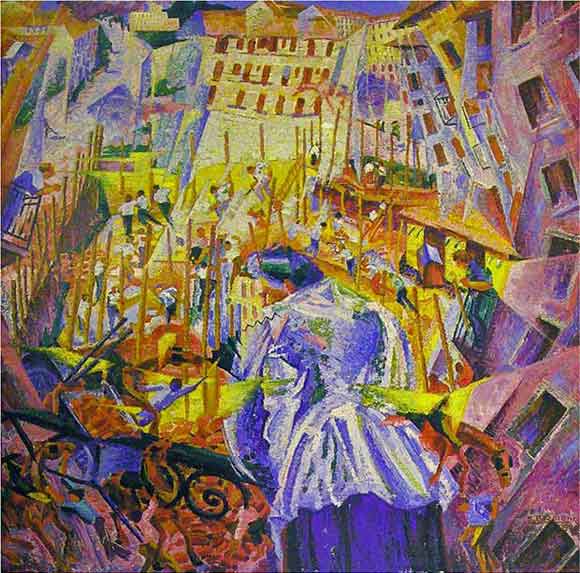 Umberto Boccioni - The noise of the street invades the House

On one square metre of painting surface the painter has crowded together a universe or a chaos show. We see from the back from above a woman who bends over balcony down. The woman is rather luxuriant, almost she falls down forward on the street - lines which from the point of the futurists should influence the state of mind of the viewer . As in a triangle is connected the stout Signora with two women in balconies on the left and on the right, is there as it were completely in stereo. The women with the surrounding buildings, so to speak, a form a gigantic empty well shaft, on ground it bubbles from work and noise. Bricklayers and carpenters, plumbers and other construction people give to do themselves, as if they had become mad. Everything makes noise and penetrates  in the walls up into the houses and flats. Everything penetrates on the centre of the picture, and this is the left ear of the woman.

What the woman looks on the street, in the square, is fully in motion. Also the houses bend, tremble, stagger, stand up anew. And off the road everything grows vertically up, the woman must feel pressed. As an imaginary window behind her already her apartment fills with noise. There it is built, there's something going on, since new happening and is much to see.

We see shovels and ladders, nags and carts, bricks and sand piles - there are still no cranes or heavy machinery. A gigantic excavation has been created there and points to something enormous in the near future. Huge structures attest to the Babylonian tower that has begun there. This will take months and years, it will be the future of the modern era. From the perspective of women, permanent houses and walls are changing and making way for the almost hellish noise and works. One small detail should not be overlooked, the hint of horse figures. One is located to the right of the woman while merging with her at the same time. Another is suggested in the bottom left. James Watt's horsepower as a measure of the performance of steam engines, the watts and kW still used today?

Apart from the complete all-round perspective from the painter's point of view, it is the colours that interpret and explain. The delicate blue of the women in their almost festive clothes (even if a broom does project menacingly from the railing on the right) and the surrounding buildings are defined by the narrow horizon. In contrast to this, a yellow or even yellowish-gold colour shines from the foundations of the new building - and probably from the lopsided living quarters at the top centre of the painting, which are clearly to be restructured. This would actually have been the location of the municipal administration and the Mayor! It is, therefore, that which is to be created that is lit in gold and yellow - "Fa tutto il commune" the Italians say, the state will do everything! Money must work! The noise is only waste, but it makes people sick - but Boccioni had not painted this yet, because Futurism only became overrun by ecological demands and environmental problems at a later stage.

The greatest attention was given to the new world, the new inventions and developments at the beginning of the 20th century. And art reacted sensitively to these, virulently as well as through "Visioni simultanee" (simultaneous visions), as a second painting by Boccioni from the same period is aptly titled. Much has been written about the relationship between Cubism and Futurism (and Divisionism etc.). However, the awakening and optimism of that time was abruptly and terribly halted by the Great War in Europe. Like many artists of this era, Boccioni and his painter friends dreamed of a "cleansing bloodbath" in old Europe - the bloodbath happened, but history and art then continued on in a different manner.

Through Futurism, Italy found its connection to the art of modernity in Europe during the highly creative period before World War I. For too long, Italian artists had been almost paralysed as descendants of a past "immortal" fame.

On an artistic level, Umberto Boccioni in particular distinguished himself and to this day his works are considered to be on par with the most significant modern artists in Europe. Like many of his colleagues and friends, at the age of 34 he fell during the war in Europe and was the victim of a riding accident at the Alpine front.

Boccioni venerates the new technologies, their speed, movement and dynamics. In various ways, he works convey dynamic form and movement, typically depicting motifs such as streets and traffic.

In order to implement his dynamic forms, Boccioni experimented with the fragmentation and composition of colour and moulded surfaces. Using light, he tried to make an inherently "still" object appear dynamic, because "dynamism" was not limited to motion in itself for the artist Boccioni. He claimed that the dynamism of the universe underlies everything.

Themes such as space and time are reflected repeatedly in his works, illustrated by the breakdown of the image into successive motion sequences.

It is not just the use of colour that is important for Boccioni; form is also a key element. He wanted to create dynamism in his paintings using "forms" . He wanted to create an "environmental experience", for example by creating movement and noise, as an effect of his works on the viewer. Snapshots together with continuous action form an entirity in a series of his works. By contemplating the work of art from different angles, a mixture of dynamism and stillness are created for the viewer. 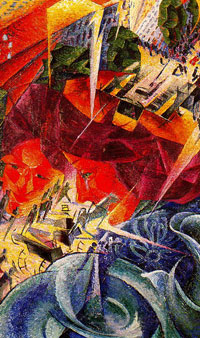